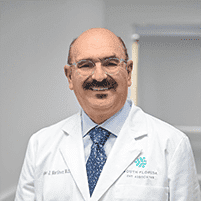 Nasal polyps are noncancerous swellings that develop in the lining of your nose and can make it hard to breathe. If you have nasal polyps that aren’t responding to initial treatment approaches, Felipe J. Martinez, MD, is an ear, nose, and throat (ENT) practice that specializes in carrying out in-office polypectomy procedures to remove nasal polyps. To schedule a consultation, call the Coral Gables, West Miami, or Doral, Florida, office today or book an appointment online.

Polypectomy is a procedure for removing polyps from the lining of your nose.

Nasal polyps are swollen areas that usually develop because of inflammation in the nose lining. They often originate in the ethmoid sinuses, which are hollow areas that drain into the side of your nasal cavity. Men are four times more likely to get nasal polyps than women.

Polyps contain fluid that causes inflammation, and they might have a link to allergies and infections. However, the reason why some people develop nasal polyps and others don’t isn’t clear.

Your polypectomy takes place in the Felipe J. Martinez MD office, so you can go home the same day.

What are the symptoms of nasal polyps?

Polyps are like little grapes. They can develop as a single polyp or as a cluster of several polyps protruding into your nasal cavity.

Symptoms of nasal polyps include:

Unfortunately, the effect on your sense of smell and taste isn’t always reversible even after a polypectomy.

It’s rare for nasal polyps to appear on only one side of your nose. If this happens, it could be a sign of an underlying health condition that Felipe J. Martinez MD needs to investigate further.

When would I need a polypectomy?

There are few treatments available for nasal polyps. Felipe J. Martinez MD first needs to rule out any infection or underlying cause for your nasal polyps, using an endoscope to see inside your nasal passages.

Steroid treatments can work well by shrinking the nasal polyps. Although you should not use many forms of steroid treatment long-term, there are steroid nasal sprays available that are much safer, as your body absorbs hardly any of the medication. They can take up to six weeks to start working, though.

If your nasal polyps don’t shrink despite being on the steroid treatment or you can’t use a steroid medication, surgery is the best solution. Polypectomy removes the polyps entirely, unblocking your nose and enabling you to breathe freely again.

Nasal polyps can sometimes come back after four years or so. If yours are coming back repeatedly despite having several polypectomies, Felipe J. Martinez MD might suggest sinus surgery to clear out and open up your sinuses. This could extend the length of time it takes for the polyps to return.

If you have nasal polyps that are blocking your nose and steroid treatment is not helping, call Felipe J. Martinez MD to discuss the benefits of polypectomy, or book an appointment using the online tool.